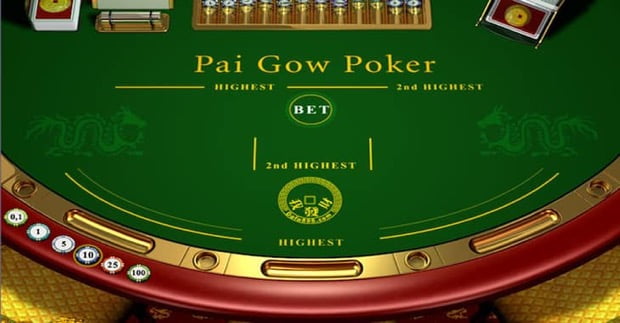 As you may have guessed, all of the skill in Pai Gow Poker lies in how you split your hands. You can’t fold, you can’t raise, and you don’t have any information except the cards in your hand. There aren’t any other things you can control within a hand. You better split up your hands well.

When splitting your cards, remember the Back always has to be a better hand than the Front.

The House Way is a way that casinos have their dealer’s split their hands. House Ways vary from casino to casino, but they tend to remain pretty similar. Looking at some house ways is a good way to develop some basic strategy.

The following is the House Way used by Golden Palace online casino:

Some online casinos (like Golden Palace), have a button that lets you split your hands according to the house way automatically, which can be great for beginners. Over time, you’ll develop your own variations to the House Way that you like to play with. The House Way is by no means perfect strategy, so feel free to play with your gut a little bit on borderline cases.

One of the best and simplest ways to increase your profits playing Pai Gow Poker is often overlooked, because it is not direct, in-game strategy. It’s a table selection strategy.

However, as the banker, you can’t decide how much people bet. That’s why you have to find a good table. Look for a table where people are betting close to the maximum. Then all you have to do is just bet the minimum in between your turns as the banker. True, you do have to have enough money to cover all of these large bets, but if you sit down with a large stack and bet the minimum, you should be in pretty good shape.

Also, if you ever find a table with players that are declining to be the banker, get a seat there as soon as you can. These players will usually have short chip stacks compared to their bet size, and won’t be able to cover other bets as banker. This gives you an opportunity to be banker more often, which works heavily to your advantage.

Remember to play smart and win big with casino strategy from Gambling City!