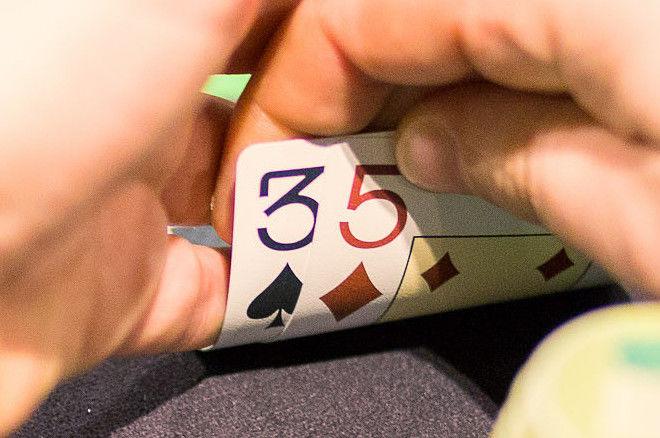 For a beginning player, the best place to start out is at low limit hold’em tables. I know all the popular buzz is about high-stakes no-limit hold’em, but you have to start somewhere. Jumping into a high-stakes no-limit cash game when you’re just a beginner will put you on the fast track to Brokesville. Trust me; you want to start playing low limits.
In low-limit hold’em games you will find a good mix of players. Some will be beginners, some will be players that simply aren’t good enough to play higher levels, some will be crazy gamblers that can’t afford to get into higher tables, and very few people will be very good.
Many of these players just saw some poker on TV then saw an ad for an online poker room then decided to sign up. Some may have been playing with friends for years, but that doesn’t mean they’re good. They may just have really bad habits.
That’s where your edge comes in. You have this guide. They don’t.

Making money at low limits is simple, you just have to hammer one thing into your hear. Low limit players aren’t good. You don’t have to make daring bluffs or great folds to win against these players; you just have to play consistently and well.
Here are some rules to follow that will have you winning in no time.

You’d be surprised how hard this rule is to follow, especially at low limits. The general rule that most winning poker players follow is to play 10% of hands. I’m a little more adventurous and like to play around 15% of hands, but I’m nowhere near the kind of players that play every other hand. Those are the kind of players that are going to give their money to you. That’s why you can’t be like them.
What do I mean by good hands?  Well there are three types of opening hands you can play, made hands, broadways, and draws.

By made hands, I mean hands that aren’t going to improve much, but are strong right off the bat. Pre-flop this means high pocket pairs and AK and AQ. I generally put AA, KK, QQ, and JJ in this category. AK and AQ aren’t technically made hands, but they’re better than all the Ace-rag hands bad players tend to play, so in that sense it’s a solid bet.
Made Hands don’t come around that often, so raise when you get them. As much as you can. You can’t afford to be worrying about the AA they might have. Just raise. People will get aggressive with anything at low limits.

Broadways are hands with two big cards, like KQ or AJ. The problem with these hands is that unless they’re suited, they can’t improve too much. Yes, they can pair, but where do you go from there. There are a large number of players in most hands at low levels, so the chances of someone else hitting a lucky two pair, straight, or flush are pretty high. That’s why you have to raise hard or fold when you have a Broadway. If you don’t raise, other players will limp in with weak draws and one of them will beat you. With a Broadway you want to be playing against as few players as possible, and if you think someone has you beat, you should probably fold.

I like playing draws in low limit games because the good hands you hit will pay you off really well. I’m talking about hands like 56 of spades that can easily give you either a straight or a flush. These hands are called suited connectors. Other hands that make good draws are low pocket pairs 2s through 6s. These can improve to three of a kind or a full house, both solid hands
Before the flop, you should try to get to see the flop by paying as little as possible with these hands. After the flop, if your draw doesn’t improve you shouldn’t put any more money in, but check through if you can.

This isn’t just pre-flop, this is all the time. The biggest problem new players have is that they’re too timid with good hands. Good hands don’t come along often enough for you to be afraid of something better. I admit that sometimes someone will have a better hand, but the number of times people will pay off your raises just to see what you have will vastly outweigh the times that you’re beaten.
If you think you have the best hand, raise. You don’t have to trick people by making check-raises or calling so you can raise the next round. Low limit players will call just about anything, so you might as well have them call you when you have a good hand.

This is a natural corollary to “raise with good hands” but is also very hard to obey. Pre-flop, I’d call a bad hand something like A5 or K8. The kind of hand that even when you hit it can still be easily beaten. Don’t play this kind of hand. These are the hands that low limit players fall in love with and call to the river on, and these are the kind of hands that give you the edge when you don’t play them.

The only time its acceptable to call in a low limit game is if you’re on a draw. If you think your hand is good, you should be raising, if you don’t you should be folding. Calling with a hand that has a poor chance of improving or is likely to be a loser is the easiest way to lose money. That’s what everyone else does. Don’t be like them.
There is however, one exception to this rule which allows you to call when you have some doubt.

Don’t Fold on the River
If someone re-raises you or bets into you on the river after a scary card like an Ace has come up, and you think you might not have the best hand anymore, you should still call. Desperate low limit players will often try to steal the pot with a raise on the river, and you can’t let them do that. No matter how doubtful you are, you can’t fold to a single bet on the river. Maybe if it’s raised and re-raised so you’d have to pay two more bets and deal with two players in the showdown, maybe then you should fold. Otherwise, just call. You’ll be surprised how often you win.

You now know enough to start getting in the game and winning some cash. If you’re successful and decide you want to move up to higher limits, be warned about using this strategy. Middle limit players are not nearly as loose and foolish as low limit ones. For more strategy articles, keep checking back at Gambling City, your one stop shop for gambling needs.