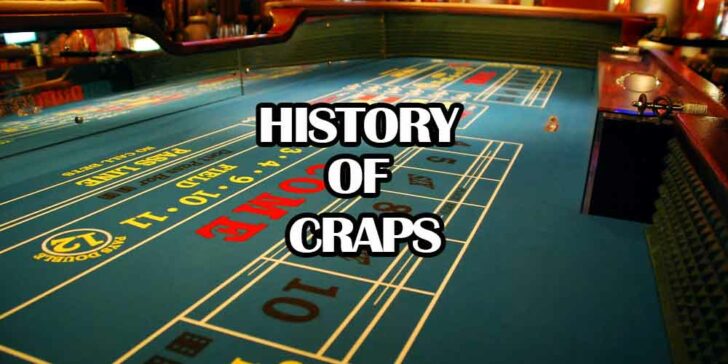 Though the reputation of this game is uniformly sterling, casino craps history is a little on the murky side. While many games have clear origins, craps gambling stems from many different sources and is widely contested by competing authorities. Both the name and the nature of the game offer their own clues about casino craps history.

The most obvious indication of craps’ place of origin is its name (and what a unique name it is!). While the basis for the game’s name doesn’t tell its whole story, it is nevertheless a logical starting point for anyone who wants to learn craps history, and is the clearest indicator of where playing craps first emerged.

Some stories erroneously credit the name “craps” to the English, saying that it is a mispronunciation of the word “crabs.” In truth, it comes from the name for another creature—toads. Some say it was the crouching, toadlike position of the players that earned the game its French designation of “crapauds.” Others claim that “Toads” was an English slur for the Creole residents of New Orleans who played the game so much. Either way, this designation was eventually shortened to “craps” from which the name got its modern moniker.

You might then assume that playing craps began in France. While it is true that the game was strongly influenced by the French, it would have its final evolution in America, and more specifically in the African American communities of New Orleans, Louisiana, where it quickly became a popular street game.

While this explanation of the history of craps satisfies many scholars, others insist that its roots go much deeper, tracing them as far back as the Middle Ages. Dice games were popular in the Middle East at the time of the Crusades, and many game historians believe that the crusaders brought back not only exotic Arabian fruits, spices, and fabrics, but also popular dice games like that of Azzahr, from Arabia.

In Europe, the name Azzahr was transformed to “Hasard” by the French and then to “Hazard” by the English. Eventually, it was endowed with more official (and Anglo-Saxon friendly) rules in the 1700’s. Hazard quickly overtook the original game of Azzahr and became popular among gamblers and aristocrats alike. The introduction of Hazard in the United States is widely credited to the nobleman Bernard Xavier Philippe de Marigny de Mandeville who was widely known as both a gambler and a politician.

The simplicity of playing craps—requiring only a pair of dice—made it popular among both the soldiers and the poor, whose resources were, of course, quite limited. It is with these parties that craps gambling traveled up the rivers (and by association the riverboats) of the United States, becoming popular not only in the streets but also in the casinos, where the game would make its final transformation.

Whereas street craps required only two dice, bank craps (the name given to differentiate casino craps from its street counterpart) became quite elaborate. New rules were established, an immense and elaborate betting system was created, and additional dice were added to ensure the fairness and consistency of the game. With the craps table came a whole new entourage: players, shooters, boxmen, stickmen, and dealers. The game soon had its own vocabulary.

Today, while street craps remains popular, it is bank craps that attracts millions to on-land and online casinos. Many of these eager players are oblivious to the long and complicated history of craps gambling; all they know is that they love the game.