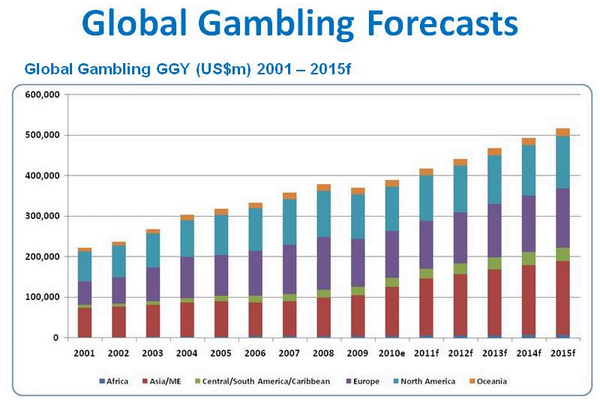 Europe. When it comes to making online gambling growth predictions, this is the word that makes gambling website operators go ga-ga. Why? The answer is simple. While one might think that the excitement would be focused on the U.S., it's online gambling in Europe that shows the greatest potential growth. That is, at least in the relatively near future.
In 2009, online gambling operators in Europe recorded a 44.9% increase in total gaming yield. Combine that number with additional increases over the last two years, 2011's Black Friday event, and the U.S. government's nonstop waffling on the legality of internet betting, and Europe appears the decisive winner in the “Best Emerging Market” contest.
The reasons for Europe's rapidly expanding online gambling market are many. Most notable are a longstanding tradition of gambling as a legitimate form of entertainment and income and the drive towards legalization and regulation within states.

But before we assess the above, let's take a quick look at the statistics.

According to H2 Gambling Captial, a global online gambling research and consulting firm, these trends will continue for at least the next few years. The below chart shows real and projected online gambling growth in Europe from 2010 through 2014.

One can clearly see that while the UK has long been a power player, Italy, Spain and France are now trending up – and fast. If growth meets predictions, they will soon be either very close to or on par with the UK online gambling market.

Gambling industry leaders and insiders have taken note of these trends. Last year, Caesar's moved its WSOPE festival from London to Cannes and the EPT held its Grand Final in Madrid instead of Monte Carlo. These represent a clear change in course; namely, one towards emerging markets.

A TRADITION OF GAMBLING IN EUROPE

Scholars trace the roots of many of Europe's most popular gambling games back hundreds of years. Craps, for example, is believed to date back to the Middle Ages. Dice games were popular during the Crusades in the Middle East, and historians say they were imported to Europe alongside spices and exotic fruits. In the 1700's, craps – known then as “Hazard” – was popular among gamblers and aristocrats alike.
Fast forward 200 years and one sees a similar proliferation and acceptance of gambling in the popularity of its lotteries. Euromillions, a joint lottery run by the Française des Jeux (France), Loterías y Apuestas del Estado (Spain) and Camelot (Britain), is open to players in nine European countries. By all accounts, it is the world's biggest lottery. An average 26 million Europeans buy tickets each week, suggesting that gambling is not only acceptable, but a part of Europe's culture.
This confidence in and comfortability with gambling makes Europe ripe for online gambling growth.

There is, however, a problem that may stymie the development of legal online gambling in Europe if it is not soon resolved. This problem is one of consistency. Umbrella-type regulations that apply to all European operators and players often conflict with national regulations, and there is no single European market.
Britain permits online gambling but requires website operators hold a license so they can be taxed and regulated. It faces jurisdiction problems by those operators who set up camp in offshore locations like Alderney and Gibraltar, and is currently grappling with the issue of advertising. Parliament is pushing for a decrease in the average 36 hours of weekly televised online gambling ads.
Italy, now the biggest European market for online poker, began issuing licenses via AAMS, its online gambling regulatory group, in 2010. France's ARJEL followed suit. Germany banned gambling entirely in 2008, but continued permitting its citizens to participate in online lotteries run by the state.
One of the best examples of the issue of licensing and regulating an industry that knows no national boundaries is a 2009 European Court of Justice (ECJ) case that pitted Santa Casa da Misericórdia de Lisboa, a Portuguese charity that runs lotteries, against bwin, a popular online gambling company based in Austria. Santa Casa claimed that bwin's activities in Portugal infringed on its national monopoly on gaming.
The ECJ sided with Santa Casa on the grounds of “the public interest,” stating that this provided justifiable cause for restricting bwin's freedom to provide services. However, the ECJ had previously ruled that countries that allow their citizens to participate in state-run lotteries could not ban ban them from wagering at online gambling websites run by private operators.
Taken together, these rulings amount to the ECJ talking from both sides of its mouth. In the time since the Santa Casa case, the EU and ECJ have struggled to establish coherent rules for the legalization and regulation of online gambling in Europe. But despite the lack of a uniform legal approach to online gambling in Europe, the market continues to grow. Currently, it appears that the model provided by Italy's system – legalize, license, tax and regulate – is the direction in which most states are traveling.

The laws may be murky, but what is clear is that European gamblers are betting anyway. In general, Europe's citizens are proving to be receptive to the notion of legal online gambling. History, after all, is on legalization's side. Though the morality of online gambling in Europe is debated here and there, even those who are opposed to the idea seem to acknowledge its inevitability. Certainly, the online gambling statistics suggest this to be so.
Whether or not the real numbers will meet the expectations, and if they do, which emerging market will be the most profitable, remains to be seen. For now, one can only speculate, watch and, maybe, wager.