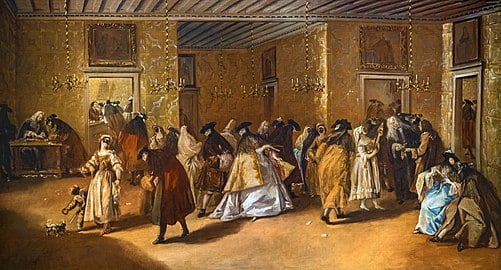 When it comes to the history of casinos, the Ridotto (plurual: ridotti) plays a unique and specific role. It is is widely considered the first instance of a modern gambling house. It is also one of the first recorded examples of “mercantile gambling” (gambling conducted as a business), as opposed to “social gambling” (gambling between friends). While earlier civilizations did have gambling houses, all of them rested on the operation of other illicit businesses that served as facilitators for social gambling. The original Ridotto was one of the first places to create house-banked games.

Creation of the Ridotto: History of Casinos

During the early seventeenth century, illegal gambling was a serious problem in the city-state of Venice. The government operated a lottery, in which most of the participants were members of the lower classes, but numerous gambling houses continued to operate in the city. These houses, known as “ridotti”, offered private games for the city’s nobility”.  (“Ridotto” comes from the Italian word “riddure”, meaning to “close off” or “make private”).

The growing popularity of mercantile gambling, despite the legal prohibitions, left Venice with major issues in enforcing its laws. In 1638, city leaders created their own Ridotto in San Moise Place. The Venetian Ridotto became the first legal gaming house in the Western world. The Ridotto would stay open from October until Ash Wednesday.

While the doors of the Ridotto were open to the public, the high stakes of the games limited its clientele to the richest noblemen in the city. Players were required to wear a three-cornered hat, cape and mask before they could play.

The reputation of the Ridotto became so well known throughout Europe that many celebrities of the time played at its tables. Philosopher Jean-Jacques Rousseau, legendary lover Giacomo Casanova, and Mozart opera librettist Lorenzo da Ponte visited the Ridotto during its long history. However, the Ridotto also drew the attention of moneylenders, prostitutes and other unsavory characters.

Architecture and Layout of the Ridotto

The architecture and design of the Ridotto carried the opulence and luxury expected by the city’s elite gentlemen. The four-story structure featured a long entrance hall and several dining rooms. The site also housed works from some of the finest artists of the period, including Gerolamo Colonna’s “The Triumph of Virtue over Ignorance”. The gaming areas took up most of the upper floors. Much like modern casinos, gaming floors featured multiple tables and a variety of games.

By modern casino standards, the games featured at the Ridotto were primitive. The most popular game was “biribi”, a game that resembles a lottery. In biribi, a player places a bet on a board (similar to a roulette table) with numbers from one to seventy. The banker draws one of the numbers from a bag; if the banker draws the player’s number, the player wins sixty-four times his bet. The game gave the house an edge of almost ten percent on every play.

The most prevalent card game in the Ridotto was “basetta”, a game that carried elements of blackjack, poker and gin rummy. An adventurous player with a deep bankroll could win up to sixty-six times his original bet, but the game also carried a heavy house edge and rules in its favor. In later years, operators switched to faro, which would popular in the American West more than a century later.

In 1774, Giorgio Pisani, a reform-minded Venetian nobleman, proposed that the Ridotto be closed down “to preserve the piety, sound discipline and moderate behavior” of the city’s residents. Pisani’s proposal was passed by an overwhelming majority, and the Ridotto closed its doors in November 1774.

The closure only fostered more illegal gambling in the city-state. Venetians took their gambling back behind closed doors. Many nobles used a smaller “clubhouse” on their properties to house their gambling operations. These clubhouses were known as “casinos” (“small houses”).

The initial establishment of the Ridotto proved that a mercantile gambling operation could be successful. Many modern casinos use business models developed by the Ridotto, including house-banked games with a built-in house advantage.