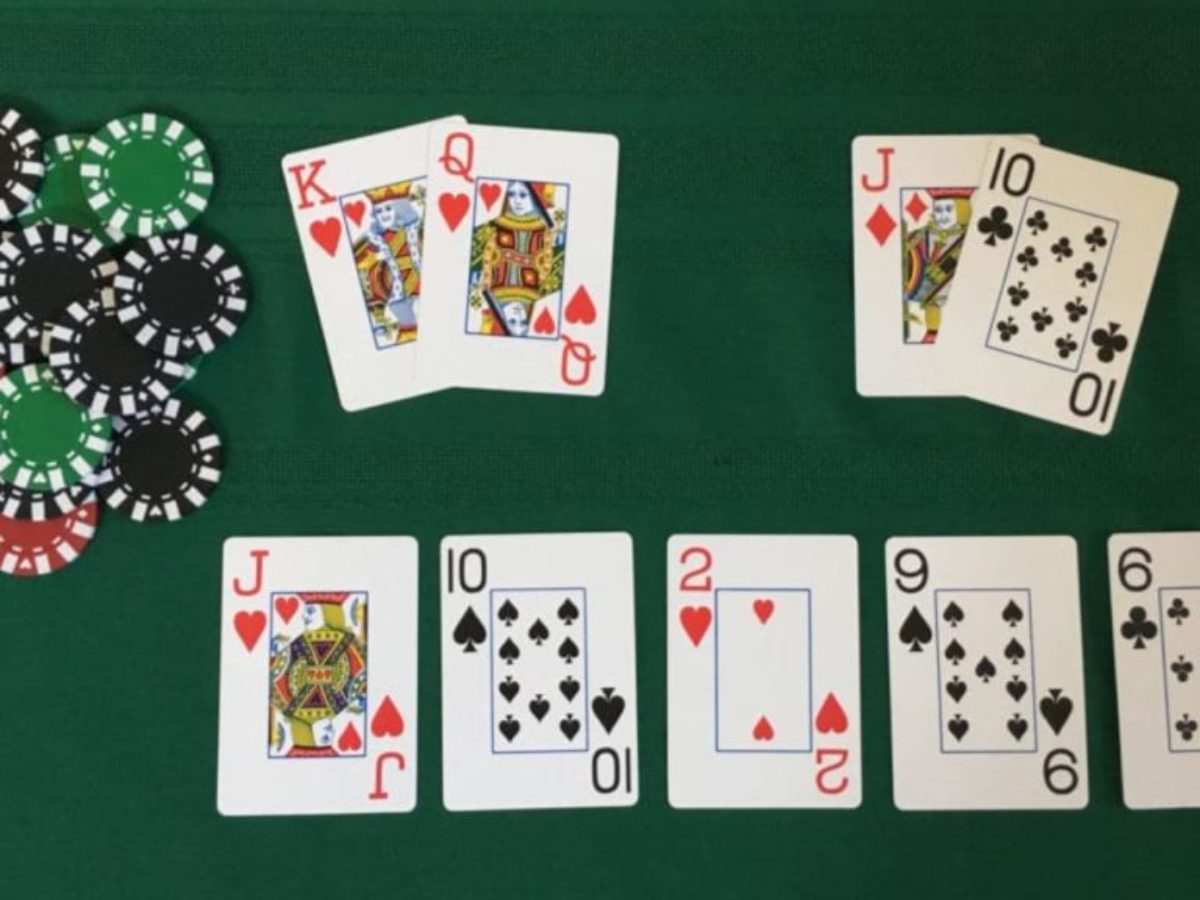 Pre-Flop
After everyone has gotten their cards, a betting round begins. This round is called pre-flop because it is before the first three community cards, the flop, are dealt. Starting with the player to the left of the big blind, each player must decide if they want to call the big blind, raise it, or fold. Checking (passing without betting) is not allowed in the pre-flop round, except by the big blind. The blinds are the last players to act pre-flop, and the money they put in as blinds can count towards their opening bet. If there are no raises pre-flop, the big blind can just check and go on to the next round.

The Flop
After the pre-flop betting round, the dealer discards the top card of the deck face down, called the “burn,” and then deals three cards face-up in the center of the table. This is called the flop. The three face-up cards count as part of everyone’s hand. For example, if your hand was AA, and the flop was 55A, you would have a full-house of aces full of fives. If someone else had a hand of 56, their hand would be three-of-a-kind fives, and so on. These cards in the center are called community cards.

After the flop, there is another betting round; this time starting immediately to the dealer’s left. If the blinds haven’t folded, they are the first to act, and then action proceeds clockwise around the table.

On a player’s turn, they can:

Check – This can only be done if no one has bet yet. The player puts no money into the pot and passes action on to the next player. This is a passive play.

Bet/Raise – To bet chips on the quality of your hand. If you are the first player to put money in, it is called the bet, and can be any size greater than or equal to the minimum bet. If someone else has already put money in, to increase the size of the wager, you must raise. A raise must be greater than the other player’s bet. These are aggressive plays.

Call – To meet someone else’s bet. After a player bets, all other players must meet the new bet, raise it, or fold. Play cannot go on to the next round unless everyone calls or folds to the highest bet.

After all players have met the highest bet or folded, play moves on to the next round.

The Turn
After another burn, the dealer puts another card face-up in the center of the table. This card too is a community card that acts as part of everyone’s hand, and is called the turn. The turn is followed by another betting round with the same rules as the flop, except the minimum bet is doubled. After that betting round the final community card is dealt.

The River
The final community card is called the river, and it is dealt face-up after another burn. There is then a final betting round with the same rules as the turn. Any players that haven’t folded after the final betting round proceed to the showdown.

The Showdown
The last player to bet (not call) is the first to show his cards. Players then go clockwise around the table revealing their cards. A player only need to reveal his hand if it is best hand so far; if there is a better hand showing, the player may fold his cards rather than revealing them.
In the end, the play showing the best 5-card poker hand is the winner and gets to take down all the chips that have been bet in the hand. In the case of a tie, the pot is split between the tied players.

All-In and Side Pots
If a player puts all his/her chips into the pot, it is called going “all in.” If a player goes all in, all players that want to stay in the hand must meet that wager. If those players wish to continue betting, they create a side pot that can’t be won by the all-in player. At the showdown, the players reveal their hands. If the all in player has the best hand, he wins the main pot, but not the side pot. Then the remaining player with the best hand takes down the side pot. If the all in player does not have the best hand, then the player who does takes down the main pot and the side pot.

The Diagram
Here’s a helpful diagram to show what a game looks like.

Well that’s all you need to get started playing Texas Hold’em. Get together some chips and some friends and have a good time. To improve your game, try reading poker books or watching pros play on TV, or you can just stay tuned for more strategy here at Gambling City.