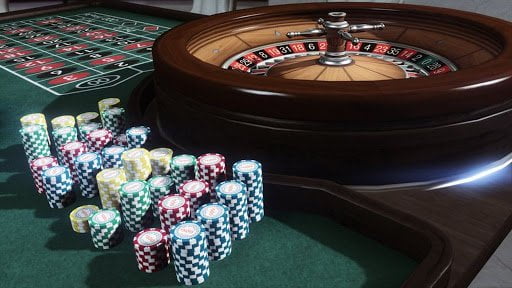 A daring bandit dressed in a motorcycle outfit pulled off a risky armed robbery at the luxurious Bellagio casino in Las Vegas. The thief entered the casino at 3:50am local time escaped with over US$1.5 million in casino chips. The denominations of the chips ranged from US$100 all the way up to US$25,000.

According to witnesses, the thief dressed in a black warmup suit and a motorcycle helmet with red and white stripes. The helmet’s visor obscured his face, so neither casino personnel nor security cameras could get a good look at his features. The man reportedly pulled a gun on a croupier at a craps table and grabbed as many high-dollar chips as he could carry.
Police reports indicated that the man took less than three minutes to commit the theft. Security cameras show the thief escaping on a motorcycle parked near the casino’s valet parking area. Casino security staffers tracked the man through the floor surveillance cameras but did not make a move to stop him for fear of starting a shootout on the casino floor.
As audacious and brazen as the theft was, the robber’s efforts may not reap him the profits he had imagined. Casino chips often have no value outside the casino walls. Players can not exchange one casino’s chips for another, so the robber will have a difficult time redeeming the chips for cash. The high denomination chips will also attract the attention of cashiers, croupiers and casino staff.
Also, many casinos insert radio frequency identification (RFID) microprocessors into their higher-denomination chips. The computerized chips enable casino workers to track the activity of their “high roller” players. Neither Bellagio officials nor the Las Vegas Police has announced if the stolen chips have RFID capabilities.