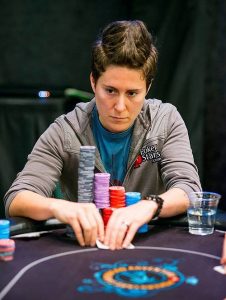 Vanessa Selbst made history when she won the North American Poker Tour Mohegan Sun no-limit Texas Holdem tournament last year as the first woman to win a NAPT title. History repeated itself yesterday when she won the same event again, outlasting a field of nearly 400 players and winning US$450,000.

Selbst became the first woman to win two NAPT titles, as well as the first person to win the same event in back-to-back years. She defeated poker pro Dan Shak to take the title, despite the fact that she started heads-up play at a three-to-one chip deficit.

Selbst told reporters on the scene that she “didn’t win this in (her) typical fashion,” as this was her first heads-up match where she did not start with a dominating chip lead. “I didn’t steamroll the table. I had some luck on my side and I played a pretty good heads up game against a formidable opponent.”

In the 2010 and 2011 events combined, Selbst has won US$1.2 million and outlasted over 1,100 players to take her two titles. The New York native and former law student has yet to be defeated on the felt in the nearby Connecticut casino. The eyes of the poker world will surely be on the Mohegan Sun next spring to see if Selbst can win three straight titles.