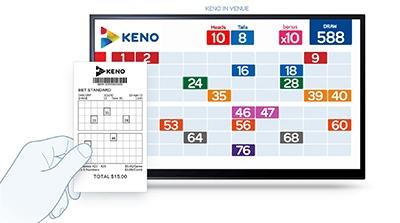 In standard keno games, you may choose among eighty different spots or numbers. Even if your chosen game places restrictions on the number of spots you can choose, there is still a staggering number of mathematical possibilities.

It is estimated that if a player chooses twenty numbers in a standard game there are over 3,535,316,142,212,174,320 different possible combinations. Since the amount of potential combinations is so large, there is not much keno strategy that you can use to turn things to your advantage.

Since the definition of strategy implies the application of skill or at the very least logic, most of what are called strategies are actually superstitions or hunches. If you play keno numbers with special meaning to you, it’s likely you will increase your enjoyment of the game, but your keno payouts will probably remain the same. Likewise, playing numbers that seem to have come up often in the last few rounds won’t improve your odds because every round is like a clean slate, subject to the same laws of odds and chance.

While the smaller keno payoffs are more common because their odds are more favorable, beyond making the smarter bets there is no guaranteed way for you to win keno.

But this strategy is extremely flawed and should not be used. Random number generators are used in all modern casinos to draw the numbers. There are no keno strategies you can use to accurately predict what numbers will be drawn next.

Foregoing strategy, some try to improve their luck by using betting systems. The idea with a system is that you will win keno often enough for the large occasional keno payouts to exceed the consistent but small bets placed. Unfortunately, because there’s no guarantee you’ll ever win, there’s also no way to ensure that you’ll win back what you’ve lost. Many times more is lost on systems than just playing as you please.

Whereas most land and online casino games have an obvious high or low goal, you can earn keno payoffs when you win and when you lose. Those that don’t hit any of their numbers can still walk away from the game with some money in their pocket. Five number bets, while they do not have the glamour of fourteen number bets, are often more profitable. Not only do these limited bets result in better payouts, but they’re also usually cheaper to make.

One strategy that may not promise a payout but that will stretch your bankroll is pre-planning your sessions. Most players hope to get a reasonable amount of entertainment from their experience, so playing conservatively ensures that they can spend more time playing without losing all of their money on one or two big bets.

Buying a book of tickets is also a great way to get more from your betting time, and the likelihood of getting at least some small payoffs in a long session is fairly high.