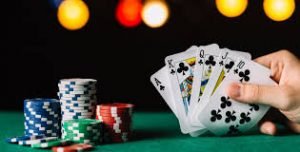 In the Beginning: Pai Gow in ancient Asia

As you might have guessed from the name, the Pai Gow Poker game variety is closely related to ancient Pai Gow, one of the oldest domino games still in existence. It is believed that the origins of Pai Gow Poker can be traced back to centuries-old Asia.
It was introduced to other countries by traders, travelers, and Chinese colonists and is, today, one of the world’s most popular on-land and online casino games.

But while the original game of Pai Gow still has a very strong following in Asia, the first American players exposed to the game were dubious.
Most table games gained initial popularity because of their ease of use. The dice necessary for a game of craps could easily be carried in a pocket, as could the deck of cards needed to play poker or blackjack. Dominoes, on the other hand, were not as convenient.
Pai Gow’s “inconvenience” was the obstacle that prevented it from meeting its full potential among American gamblers.

Putting the Poker in Pai Gow: History of the game after dominoes

In the late 20th Century, though, Pai Gow was discovered by two men who would chart a course for the history of Pai Gow Poker.
Game designers Fred Wolf and Sam Torosian saw promise in the game, noting that, although it had been altered significantly in the hundreds of years since its advent, it had also retained its charm. They also recognized that American casino goers would not be quick to embrace the concept of dominoes.
One small change solved the problem. Wolf and Torosian adapted the game so it was played with cards in lieu of dominoes.
This single change marked the true beginning of Pai Gow Poker history.

Most game historians agree that Pai Gow Poker made its first appearance – courtesy of its two clever inventors – in the California Bell Casino in 1985.
It became so popular among both American and international tourists that the Las Vegas casinos were quick to join in the craze.
By 1986 – only a year after the first Pai Gow Poker game was introduced to casino play – it could be found in casinos up and down both coastlines and was a regular feature in Las Vegas as well.
It's worth noting that the success of Pai Gow Poker inspired its inventors to create other popular games (like Super Pan-9).

The history of Pai Gow Poker doesn't stop on the Las Vegas strip.
When internet casinos were established in the late 1990's, a Pai Gow Poker game was considered a necessity.  Its unique playing format and global popularity were perfect for a medium that targeted a diverse international audience.
Soon, gambling executives and internet gurus were looking for new ways to capitalize on the game's popularity. The logical next step was the addition of a bonus, a treatment that had been given to several other popular online games.
Thus, the history of Pai Gow Poker took another turn when a Bonus Pai Gow Poker game was created. Many players are attracted to the increased winnings offered by the bonus system, which has helped sustain Pai Gow Poker's popularity among online casino games.
Today, thanks to the proliferation of web gambling, you can enjoy all three incarnations of the game.
Begin with the origins of Pai Gow Poker by sitting through a round of Pai Gow dominoes; play the first version of Pai Gow Poker, the way that Wolf and Torosian intended it to be played; or try your hand at Bonus Pai Gow Poker, the most popular version of the game.