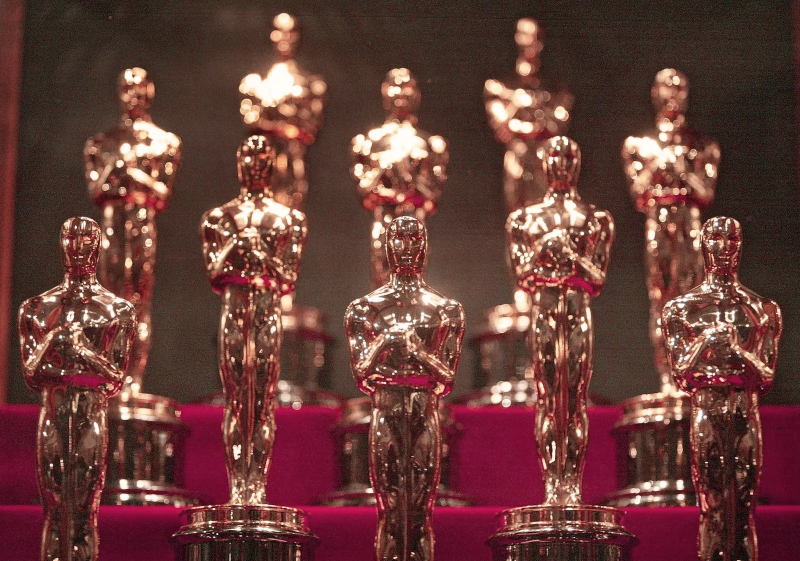 It's Oscar season, and you know what that means – Every person on earth who has ever been to the movies (i.e. every person on earth) is playing film critic and proclaiming their favorite for Best Actor, Best Picture, Best Score…okay, maybe not best score, but you get the idea.

The online gambling industry isn't immune to the excitement surrounding the Academy Awards, with Oscar bonuses and promotions aplenty offered throughout the worldwide gambling interweb.

To get in the action, we at Gambling City are creating our own kind of buzz by writing a series of Oscar-related articles and news items. First up, the best Oscar movie and celebrity-themed online slots games (plus a few based on our favorite TV shows). Read 'em, play 'em, and let us know if you like 'em as much as we do. And then look for the next article in our Oscar series – odds on Oscar movies.

Released in the US in May of 2000, Gladiator is an epic historical drama that tells the story of a Roman general (portrayed by Russell Crowe) betrayed by the emperor's ambitious son, Commodus (Joaquin Phoenix), who murders his father and seizes the throne.

Directed by renowned filmmaker Ridley Scott and credited with restoring interest in the historical epic, Gladiator won five Academy Awards at the 73rd annual Oscars, among them Best Picture and Best Actor for Crowe.

The Gladiator slot game is as entertaining and powerful as its namesake film. The 5 reel, 25 line game offers a maximum prize of 5,000 times the line bet, and features movie footage, photos and sound bites extracted from the film.

In addition to its fabulous graphics and special effects, it boasts fabulous features, including:

* The Gladiator Bonus – Triggered when three wilds appear anywhere on reels 2, 3 and 4, it awards nine Gladiator helmets that each reveal prizes of up to 5 times the total bet.

* The Coliseum Bonus – Triggered when three or more Coliseum scatter symbols show up on the screen, this bonus rewards free game multipliers and extra wilds.

* Gamble Feature – Following a win, players can opt to double their money by clicking on the ‘Gamble' button.

Who doesn't know and love Marilyn Monroe? Though Oscar eluded her, she won a Golden Globe for her performance in Some Like it Hot and critical acclaim for her roles in Bus Stop and The Prince and the Showgirl.

Those close to her say the public Marilyn – ‘Happy Birthday, Mr. President' and playing naïve whilst revealing her knickers above a NYC subway grate – was not the real Marilyn. She was, they contend, smart, sensitive and wildly talented.

Whichever Marilyn you prefer, her beauty and power to seduce are not lost on the Playtech slots game that bears her name.

* Animated scenes from her best-loved films flash across the screen in this 3×5 reel, 20 payline game that features the blond bombshell as a wild on all reels. When 2 or 3 wilds appear on a single reel, you win, and Marilyn expands on the reels to reveal the above mentioned iconic white dress blowing upwind.

* Another unique Marilyn slots game feature is the Backstage Bonus round, wherein players pick two classic Marilyn images for a chance to win up to 45 free games with up to a 10x multiplier.

If sheer numbers were the determining factor in naming the biggest movie stars of all time, John Wayne would surely be among Hollywood's top honorees. Over his 50-year career, Wayne appeared in more than 175 movies, from major Hollywood epics to shorts, documentaries, promotional films, television shows and special appearances.

Fortunately, The Duke – as he was known to fans and friends – doesn't need the strength of his numbers to be a winner. Among his hundreds of awards and accolades are three Oscar nominations, including a win in 1970 for his performance in True Grit.

Small wonder then that Wayne is commemorated in what is perhaps the most macho celebrity slots game online. Developed by gaming software company WMS, the game contains features that measure up to the man, the myth, the legend. These include:

* A bonus round with up to 50 free spins available. Get 5 or more Buffalo Coin symbols in any spot on the reels and you win 8-50 extra spins. Hit a spinning streak during the free spins and you get a 2x – 10x multiplier added to your wins.

We could go on and on – there are dozens of noteworthy Hollywood-related slots games – but we're going to fast forward to a few of our favorites based on some of the small screen's most beloved hits.

This 5 reel, 25 payline Playtech slots game is based on the TV series of the same name. With Tony, Paulie, Artie and Christopher in tow, the game lets players spin for as little as 25p and as much as £1,250. Talk about bada bing!

Trekkies take note: The Star Trek Slots Game is, in a word, stellar! The 30-payline Star Trek slot game features all your favorite original Star Trek characters, from Kirk to Spock to Uhura and Scotty. Match two character symbols and you enter one of four unique bonus rounds.

For some reason, Baywatch and online slots seem the perfect partnership. Sure, blondes and bikinis and sun and surf are common slots themes. But it's more than that. It's the downright silliness of the show – and we mean that in the best possible way – that's so wonderfully suited to this 5 reel (non-progressive), 20-payline video slot that is as rewarding as it is entertaining.

Sadly, Mitch Buchannon, David Hasselhoff's cheesy but beloved character, does not make an appearance. However, other show faves like CJ Parker and Matt Brody are brought to life with fantastic graphics, sound effects and special features.