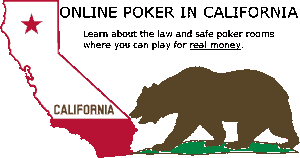 A study commissioned by the California Online Poker Association showed that the state could bring in an additional US$1 billion over ten years if legislation to regulate online poker within the state becomes the law of the land. The study also determined that online poker would create more than a thousand new jobs.
During the last few years, California has suffered a severe budget crisis. The state is currently running at a deficit of over US$25 billion. The state’s unemployment rate is twelve percent, well above the national average. The depressed housing market has also led to a decrease in the state’s tax base and a drop in tax revenues.
Lou Correa, a California state senator, has proposed Senate Bill 40. The bill, also known as the California First, The State Funding, Job Creation and Online Gaming Accountability Act, would allow state residents to play online Texas Hold'em on sites established within the state. Companies that wish to develop such sites would apply for a state gaming license and pay taxes on the revenue generated.
Senator Correa said that one of the most important aspects of the bill is that “it keeps California revenue and jobs (in the state) instead of going out-of-state or offshore.” He also said that newly-elected Governor Jerry Brown will consider any measure that can increase tax revenue without affecting vital public services.
A separate study, conducted by Tulchin Research, showed that more than sixty percent of all state residents favor the creation of state-run online poker sites to help with the budget shortfall. Currently, residents of the Golden State spend more than US$13 billion annually at offshore poker sites.